Jack Scott, Author
Jack has published the best of Perking the Pansies, the blog, from the Turkey years as a two volume e-book. Welcome to Part Two of the mini-series - Turkey Surviving the Expats. The uncensored director's cut includes previously unpublished material. 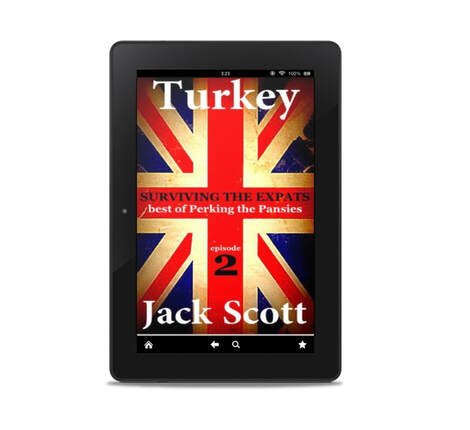 In 2009, Jack Scott and his Civil Partner, Liam, sold off the family silver and jumped the good ship Blighty for Muslim Turkey. They parachuted into paradise with eyes firmly shut and hoped for the best. When the blindfolds were removed what they saw wasn’t pretty. They found themselves peering over the rim of a Byzantine bear pit. Bitching and pretension ruled the emigrey roost. The white-washed ghettos were populated by neo-colonial bar-room bores who hated the country they’d come from and hated the country they’d come to, and were obsessed with property prices, pork products and street dogs. Expat life was village life where your business was everyone’s business. For Liam, it was the barren badlands of the lost and lonely. For Jack it was the last stand of the charmless Raj - 'Tenko' without the guards, the guns and the barbed wire. It took them a while to find their feet and separate the wheat from the chavs but, determined to stay the course, eventually they found diamonds in the rough and roses among the weeds.
Download an e-Book from Amazon